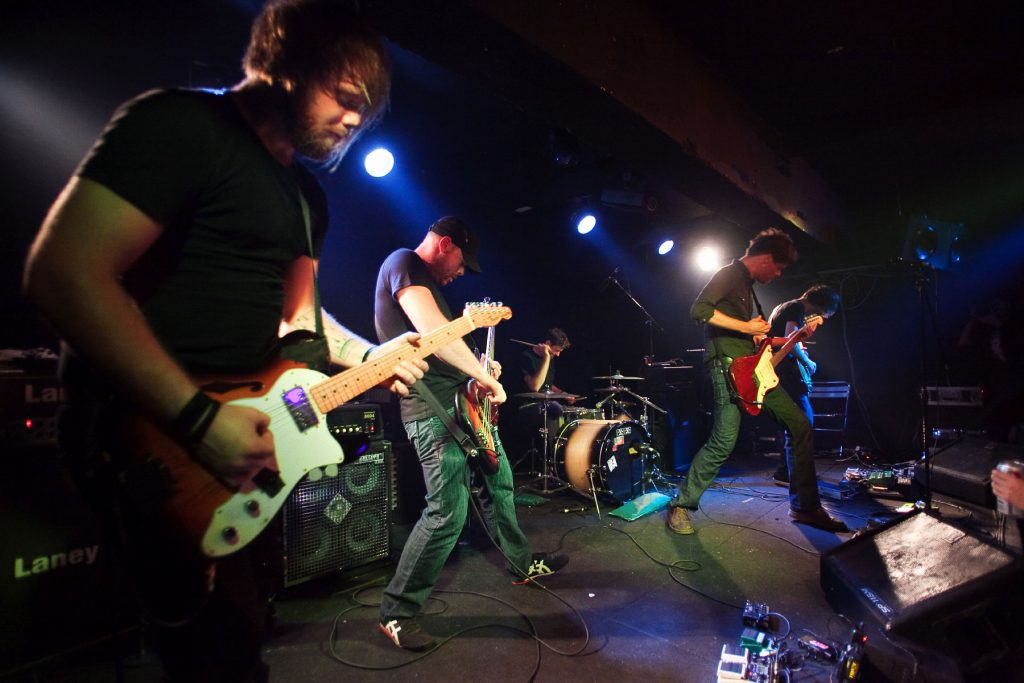 How has HK’s independent music arena grown and sustained itself? What specific shape has localism taken since 2009? In the second of his 10-episode essay, Elliott Wan accounts for Hidden Agenda’s five-time threat of closure, which ironically was the result of an attempt to “(re-)vitalize” under utilized industrial space. 正是「活化」的果效，充滿活力的 Hidden Agenda 經歷了5次的關門。

**feature image: image courtesy of Tommy Au; photo taken in 2010, use with permission

According to official findings, non-compliant uses were widespread in industrial premises, read against the session “Other Specified Uses” annotated “Business” (“OU(B)”) zones. There were two main kinds of non-compliance — first, activities that are not permitted use in the current planning zone and with no planning permission granted, and, second, activities not complying with the lease conditions of the lot.

Four policy measures were introduced by the administration in 2010, which included those that incentivized owners to redevelop their buildings through waiver fee exemptions and lowering application thresholds for compulsory sale orders. These policy measures were put in place to “encourage the revitalization of vacant and under-utilized industrial buildings in non-industrial zones” or to achieve such a purpose by moving industrial activities into existing industrial zones (HKSARG). Furthermore, the administration hoped to boost local economic growth by enabling owners to revitalize their industrial buildings as well as create job opportunities and more usable floor spaces at competitive price for different trades (Chan et al. 57).

The scheme impacted the community in various ways. First and foremost, the value of these industrial buildings increased after their revitalization; industrial rent index increased from 75 points to almost 110 by 2010. (See chart below.) Since then, the rent index has steadily risen to 209 points in 2019. In realistic terms, the development of small businesses and artists were suffocated – these businesses and artists now must pay over 150% of their usual rent (The Sun). In Hidden Agenda’s case, their monthly expenditure for rent jumped from $10,000 in 2010 to $25,000 in 2012 – in both cases for a flat of 4000 square footage (Zuser 62). 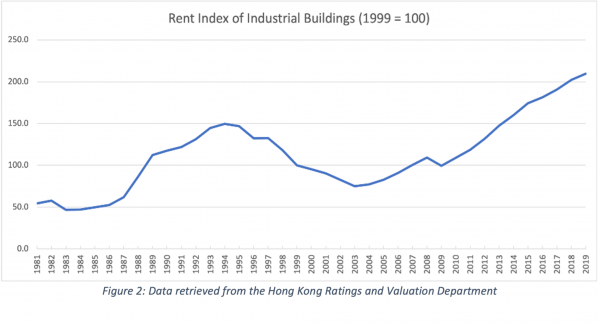 Since its inception, Hidden Agenda experienced the threat of closure five times. Of the five instances, four could be attributed directly to the government’s policies regarding non-conventional local performance venues. On 31 January 2010, just under a year since its inception, Hidden Agenda was forced to close its doors due to the revitalisation of the industrial buildings in which the venue was situated.

During the annual July-first protests, founders and organisers of Hidden Agenda were involved with the “Revitalised Alive Demonstration” (生勾勾被活化大遊行). Through the demonstration, the crew of Hidden Agenda demonstrated protest slogans and signs related to how creative and cultural users of these industrial buildings were being “revitalized” even though they were, in a way, vital already towards the development of the local creative and cultural industries in Hong Kong. Leung Bo argues that “the fact of the matter is that the vacancy rate of factory buildings has not been lower than that of commercial buildings for most of the time since 1987 (except in 1988 and 1996), therefore, this ‘revitalisation’ is not an industrial policy, but a property market policy in the name of industry (原人, inmediahk).” Furthermore, the new policies allowed the de-regulation of property developers, meaning the upper limits of rent was removed, whereas users of industrial spaces were fiercely regulated.

The incident described so far increased public awareness and attention of the status quo of Hong Kong’s own creative and cultural industries, thus also exposed the problems encountered by Hidden Agenda, and earned for them more support from the general public.

However, the first closure of Hidden Agenda and surrounding band rooms in Kwun Tong signalled only the early martyrs of the revitalisation policy, that is, it was a foretaste of what was to come in the future.

The third-generation Hidden Agenda opened in 2012. This time, no surprise, rent was substantially raised further. Hidden Agenda rented a flat of 4000 square foot, similar to that of the second generation. But rent increased over two-fold to HKD25000 per month. This time, Hidden Agenda sustained its operation for over three years, hosting shows and bands from across the world, averaging one show per week. The third generation of Hidden Agenda substantiated its status within the indie music scene: it was the place to go to for indie music (Underdog). With substantial experience gained from previous events, Hidden Agenda started to transition itself from a local venue to a trans-local venue, putting the ‘Hong Kong stop’ on the map for overseas and regional bands who were touring around the area. Concertgoers can be assured that each event will be of certain quality, even if the audience were not familiar with the band or artist performing that day (Underdog).

Third-generation Hidden Agenda’s shift of identity and mode of operation was contentious. Due to the need for stronger professionalism in management alongside the growing scale and scope of the venue, relations within the group grew tense. In the beginning, Hidden Agenda was especially dedicated to promoting the local music scene, but the bigger space and the aspiration to accommodate diverse music genres led to stronger internationalization of shows. In the past, around 80% of all featured bands came from Hong Kong and mainland China, but in 2013, this ratio was almost reversed (Zuser 66).

In 2017, during a performance of UK rock band ‘This Town Needs Guns’ at Hidden Agenda’s Ngau Tau Kok venue, government officials, including inspectors from the Immigration Department and the Police Force, raided the venue, detaining the person-in-charge Steveo Hui. This Town Needs Guns and one other performing artist were also detained under charges of ‘illegal labour’ (BBC). This caused Hidden Agenda to close for the fourth time. This event also increased public awareness and attention towards Hong Kong’s creative and cultural industries, demonstrating how international bands were not welcomed within Hong Kong by local authorities, Hong Kong’s status as Asia’s World City was challenged.