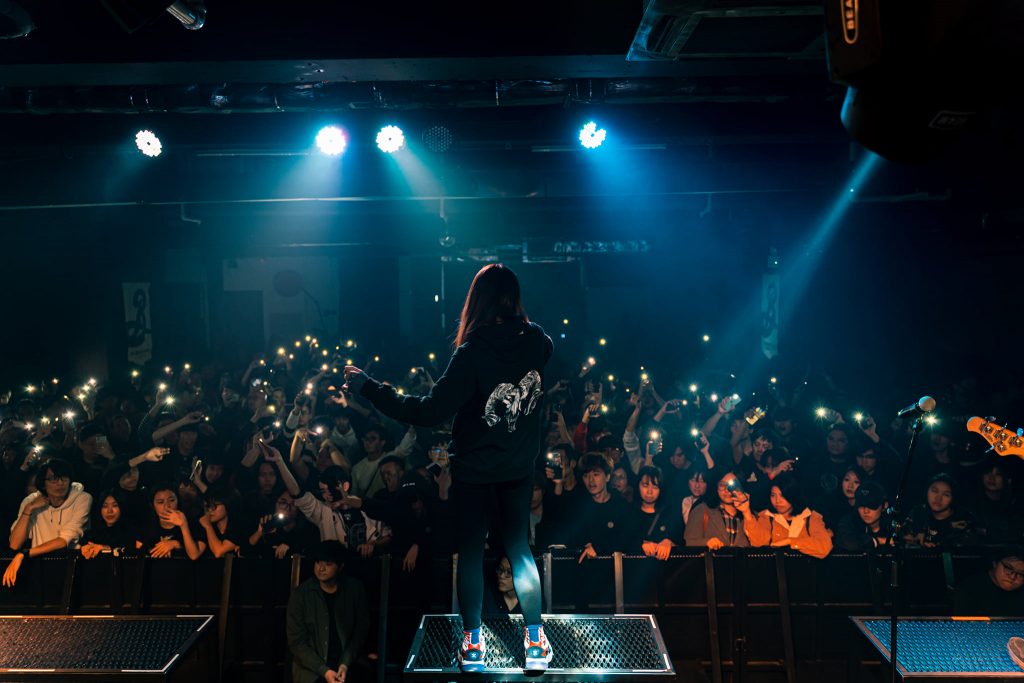 As part of his undergraduate thesis, Elliot Wan examines the shifts in HK indie music’s modes of distribution. Online-streaming and virtualization has been a growing trend, even before COVID-19 arrived. 獨立音樂的生產與傳遞趨數碼化、善用虛擬平台已成大勢，卻並不單由新冠狀肺炎所起。

*feature image: from the FB page of Hidden Agenda

Often, the word “indie” has two common meanings. One, connotative of a musical style, and two, a specific economic separateness from the major labels during an earlier punk/post-punk period. However, Senior Lecturer in Music Samantha Bennett in The Conversation elevates the definition of indie to an entirely different school of thought, believing that indie “is an all-encompassing terminology that describes general resistance to popular and mainstream culture, evoking realism, independence and authenticity (Bennett).”  However, as discussed earlier, the survival of independent music and the indie scene depends on successful clustering of the stakeholders within independent music — artists and consumers. The distribution method of music from artists and bands to fans and audiences is essential to the music’s hype and popularity and, in turn, the flourish of the scene.

With streaming services on the rise within recent years, artists increasingly turn to digital rather than physical means of distribution, which ranges from the printing of CDs, vinyls, and other various merchandises. According to the Recording Industry Association of America, more than 75% of United States music industry revenues in 2018 were generated from online streaming. 12% was generated from online downloads, and a further 10% from physical sales (RIAA). In a report published by Counter Point Research, mainstream online streaming platforms, such as Spotify, iTunes, and Amazon Music together controlled more than 65% of total paid subscriptions in 2019. In Hong Kong, user penetration of above mentioned digital streaming services is 21.3% in 2021; more than one-fifth of Hong Kongers consume music via digital streaming (Statista). These digital methods of distribution garner billions in revenue each year from consumer subscriptions, advertisements and other income streams (Kumar), shifting huge amounts of power from labels and artists to the streaming service, which now has been dictated to be consumers’ preferences. Consequentially, musicians and bands may increasingly create music for the algorithm rather than live-performance situations with the physical presence of the audience.

By cutting out the middleman, independent bands, labels, and artists can take back control of their creations and the distribution of said creations. Independent platforms could help independent artists and bands to reach a wider audience; indie labels and artists are always willing to take risks and to try out new ideas, often becoming market taste testers for the mainstream (Leung 120). Platforms such as indiecast.fm, a local music streaming service launched in 2015, offers a free-to-use model. The platform pays for its daily maintenance costs, such as server and running costs on donations made by the community (Buy Me a Coffee). Artists can freely upload their music to the platform whereas consumers can listen to any song or album they choose – albeit at a lower bitrate and quality. This lowers the threshold of music distribution and music consumption when compared to popular streaming services such as Spotify and iTunes, where costs are higher for both music consumption and distribution. By cutting out the barrier of access in these situations, artists and consumers are more empowered.

Indiecast.fm saw more than 280 artists utilising its platform for music distribution, with more than 2000 tracks uploaded since 2019 (Fu). A variety of genres can be found among the tracks uploaded to the platform; popular genres of songs uploaded include electronic, alternative, pop, rock, metal, hip hop, and folk. [See Appendix below] This could be attributed to the fact that independent musicians of Hong Kong do not flock to a single genre or style during production, but rather understand that the ‘indie scene’ is pulled together by a specific resistance to popular and mainstream culture, as defined earlier by Bennett. In Hong Kong’s case, this specific resistance could be understood to be against the dominating, cookie-cutter genre of Cantopop.

Taking a closer look, within the 100 most popular songs since 2019, 26 songs fall into the ‘alternative’ category. 22 tracks were hip hop and rap, 12 were metal, whereas rock and dream pop both had 8 songs each only. Looking at the percentage of top 100 tracks out of total tracks uploaded in each genre, city pop, bedroom pop, and hip hop are genres that stand out to be more popular, as evident. This can be attributed to the fact that since genres of music that fully utilise the constraints of a bedroom studio are easier to manage and create, artists tend to gravitate to these production methods, taking the ‘easy way out’. Kitson Chu puts it this way:

“However, this [bedroom studio] sort of music production has left some genres behind. Nowadays, I think bedroom pop and hip hop are popular – both of which are easily created within bedroom studios.” (Author’s interview with Kitson Chu, 2021)

Bandcamp, another music platform launched in 2008, offers music distribution services, connecting independent artists and labels with audiences from around the world. While not a streaming service, Bandcamp offers “artists a digital storefront for sales of digital files, physical releases, and merchandise.” (Hesmondhalgh et al) Artists can upload music freely to Bandcamp, with Bandcamp taking part of the revenue whenever there is a sale of music or merchandise. (Bandcamp) Relatively well-known Hong Kong independent bands such as Rubberband, Instinct of Sight, David Boring, Lucid Express, Prune Deer, and GDJYB all host their discography on this independent music platform.

The on-going COVID-19 pandemic brought the world to a standstill. Music industries from around the world suffered without live events with the subsequent lockdowns and bans on social gathering imposed by respective governments in each region; world tours were postponed, shows were cancelled, and tickets were refunded. In response to the total ban on live music and social gatherings, artists from around the world turned to digital and online means for the distribution and performance of their music. Of course, live streaming existed before COVID-19; live streams were “never meant to replace live shows, but to offer another string of revenue by enlarging fan engagement and online reach (Bienvenu, 2).” It may be beneficial to look at live-streaming as a separate medium than a tentative substitute for live performance, as it is “not really a concert, and it is not really a recording either (Thomson and Ng, 3).”

Live-streaming may well be studied as a different genre. The fact of the matter is that both the distribution and consumption of music through online means garnered heavy attention and popularity within Hong Kong and worldwide. We could be thinking about performance and recording in a different light.

The pandemic was in full force in Hong Kong during March 2020, prompting the HK administration to put a ban on public gatherings of more than four people in late March of 2020, as well as the subsequent temporary closure of bars, pubs, and live event spaces in April of the same year. Hong Kong musicians were not able to host or perform live at venues and event spaces; event venue crew such as sound engineers, lighting crew, and logistical support are now left without gigs and jobs. Furthermore, governmental programs to alleviate the effect of COVID on workers did not recognise members of the gig economy as salaried workers, therefore, these people were left out of any stimulus cheques or emergency funds (Chris B).

To normalise the situation, promoters and musicians began to turn to digital platforms such as Facebook and YouTube for livestream of home-concerts. Worldwide, over 8000 live stream events were scheduled by March of 2020 (Frankenberg). This was evident in Hong Kong as well, with numerous live-streaming concerts and festivals being held since then.

There has been prominent growth in presence of indie music on digital media platforms, with virtual events and festivals being held to bring live music back. Tone Online Music Festival was held twice during the pandemic period, with the second edition featuring local acts such as Instinct of Sight, Smoke in Half Note, SilHungMo, and Maniac. Packages featuring various merchandise such as playing cards, beer, and even a hand-delivered meal to your doorstep prepared by the organisers were offered in addition to virtual tickets. Tone Online Music Festival 2 successfully raised $400,000 Hong Kong dollars for both artists and crew, providing income to those whose jobs and pay were suspended due to the pandemic (TickCats).

Ear Up Gig Online, among others, advanced a more permeating practice of online events. Their aim is to “deliver an extensive online experience through music prowess and fashion to a wider audience (Ear Up).” As online performances garner attention and hype, more and more artists will try their luck with an online show. This over-saturates supply and force artists to innovate and create new ideas, elevating themselves to a new level. This further accelerates the change in production and distribution methods which independent musicians utilize.

Bandcamp. “About Us.” Bandcamp, bandcamp.com/about.

Bienvenu, Grégoire. Is Livestreaming the Post-Covid-19 Future for Live Music?, May 2020, www.researchgate.net/publication/342360942_Is_livestreaming_the_post-Covid- 19_future_for_live_music.