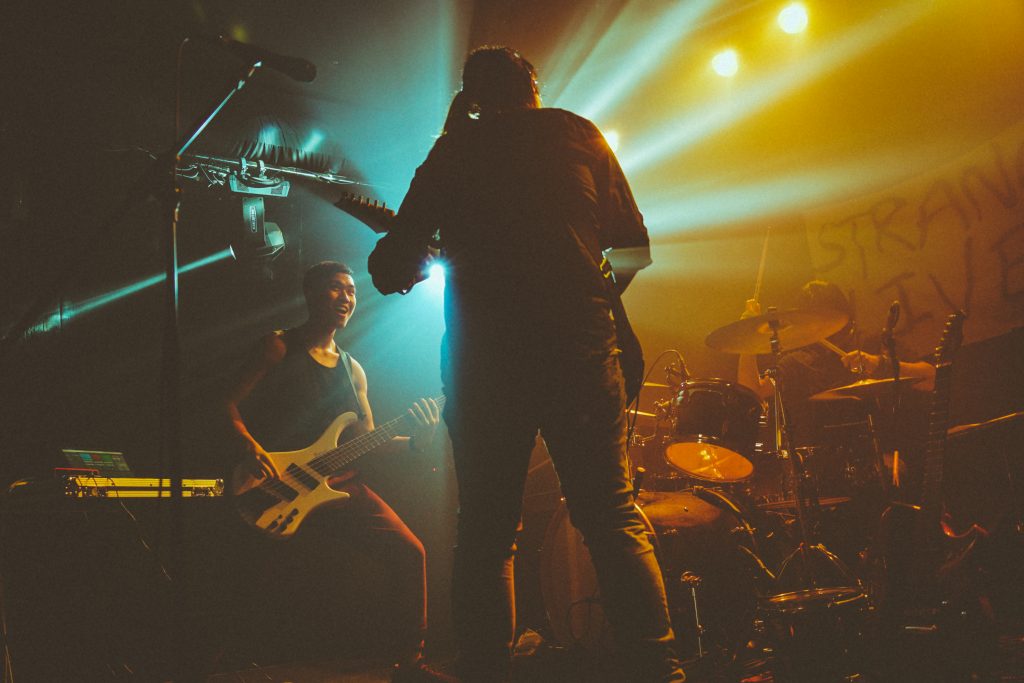 An Ancient Greek proverb says, “Society grows great when old men plant trees in whose shade they know they shall never sit.” If immediate profits are all that we care about, the same mainstream-Vs-independent split will repeat itself. 若要擺脫活在西歐和亞洲區的陰影下，就得重注孕育年青新一代本地獨立音樂創作人，現在就得改善土壤，為了不太近的未來。

The Economy of Independent Production and Distribution of Music

Curators, labels, musicians, and consumers must continue to put resources into the economy of the Hong Kong independent music scene. Of course, there is only limited money and resources within the ecosystem – however, an Ancient Greek proverb famously says, “Society grows great when old men plant trees in whose shade they know they shall never sit.” If only immediate profits are considered, then the same phenomenon will repeat itself — where Cantopop singers will dominate charts, squeezing out independent and alternative musicians and artists. As Hugo Fu puts it,

In order to further develop the independent music scene of Hong Kong, effort must be made for artists and bands to transition from the local level to the trans-local and regional level – whether this effort is made by the artists themselves, labels, promoters, audiences, or even governmental and commercial initiatives. For example, there are initiatives by both the private and public sectors to consciously develop and strengthen the cultural output of the United Kingdom. Media outlets allocate resources and programs such as BBC Introducing that help up-and-coming bands reach the wider audience. Utilizing various media, BBC Introducing also “provides up-and-coming artists with broadcast opportunities on television and online, as well as the chance to perform at major festivals and showcases (BBC).” Reading and Leeds Festival, one of the United Kingdom’s most popular live music and arts festivals allocate an entire stage for artists that are curated by BBC Introducing, while similar acts are often invited to play at other festivals in the UK and worldwide such as T in the Park, Glastonbury, Montreal Jazz Festival, SXSW Showcase in Austin, Texas, and Radio 1’s Big Weekend.

Compared to the many forms of innovation witnessed in the UK, Hong Kong’s leading arts and music festival, Clockenflap, for example, pales in their efforts and initiatives in the promotion of local culture and talent. During the proposed 2019 Clockenflap Festival, only about 15 acts were local out of 90 or so acts over the three-day festival. Furthermore, only one local act was allocated on the main stage (Clockenflap).

By sidelining local artists and musicians, Hong Kong’s local culture will always be overshadowed by foreign and regional cultures. It is through the cultivation of new and young artists that the local independent music industry of Hong Kong can survive and thrive.

Re-inventing the venue … survival without the live house? Gathering for music alone?

Furthermore, Hidden Agenda have the spatial characteristics of being trans-local, as the original sites embodying local history and culture have been re-appropriated into sites for local music subculture, which is inspired by cultures from afar, while the venue’s reliance on industrial spaces that were not designed for live music makes Hidden Agenda an appropriated space (Yi 15). However, evidently from the government’s action towards these cultural and creative spaces, the five-time closure of Hidden Agenda further proves that trans-local and appropriated venues could not survive the constraints of cultural policies, city planning, and social space within Hong Kong’s own ecosystem.

Since Hidden Agenda’s shift in operational methods and the closure of This Town Needs, there is nothing that seems to have successfully replaced it in its leading role in curating and promoting Hong Kong’s independent music. During the recent months in the absence of This Town Needs, artists and bands are beginning to utilize weird and non-conventional spaces to host online and offline band shows. Whereas Hidden Agenda gathered audience because of its reputation as a live house, these bands gathered audience not because of the space in which they were performing in, but rather the music and people behind the band.

Currently, the number of live music venues in Hong Kong to stage band performances has been decreasing. The decline means even less space for live performance. Bands may lose the motivation to meet the costs and time to required to achieve success at a higher level. Hugo Fu puts it this way:

“As live houses decrease, so will performance spaces. People will not know what they are ‘playing’ for. Let me tell you, people will start to distance themselves from the ‘indie’ way of things if they cannot even find a single venue to share their single or album release, but just with close friends. When these local venues close, less and less artists will be able to break through the threshold for success of the next level. This may be why people will start to play by the rules and sign deals with record companies and labels in order to facilitate their success, ultimately leading to the collapse of the Hong Kong indie music scene.”
(Interview: Hugo Fu, 2021)

It appears that whoever could sustain their venues would be more likely to sustain the mission of the indie live-house music culture, and would likely to take up the next leading role. However, local musician Underdog cites the huge cost of initial investments and capital as an explanation to why no new venues or performance spaces have sprung up to lead Hong Kong’s independent music scene. There is only that little money within the ecosystem; how it gets split and distributed, alongside the issue of how resources get allocated is the key to the success of Hong Kong’s independent musicians, venues, and labels (Underdog).

“There is not as much start-up costs associated with band use and creative use as for a live house. For example, for band use, common costs associated are monthly rental costs, costs for studio recordings, mixing, post production et cetera.

“However, there is such a high economic cost to start-up a venue. Due to rising rent costs, I doubt there would be new venues around soon.”
(Interview: Underdog, 2021)