誰需要童話、仙境？成年人。童話用美麗的外貌包裝著似謊話非謊話又不能盡言的現實碎片。五個作品，仙境是引入，內部內裡又一個世界。圖像解構，就是為了把外貌與內涵的勾連表達出來。Fairy tales are associated with children, so are animation pictures. The works in this post seek to gain understanding of several animation pictures that are certainly beyond magical lands and imaginary being that excite children. The appearances of fairy tale could be begging adults to preserve room in their minds and hearts for the idealized or to caution them not to forget the hidden flip side of magic which could be horror. Appearances do not correspond to what is interior. So the pictograms, as analytical, interpretive and even deconstructive exercises, also juxtapose the manifest visual styles with embedded critical constructs of the fairy-tale worlds in each work. Sofya Anatove selected five such works. — Linda Lai

Alice Yau’s pictogram for Yuri Norstein’s Tale of Tales (1979, 29m, Soviet Union) depicts the positional relationship between the visual elements in the animation by using lines and symbols.

The activities conducted by the characters function as a metaphor of life experienced in Soviet Union . Some activities are connected whereas some stand alone as unique events. The symbols, as groups of inconspicuous lines and dots, are combined to communicate comprehensively the original animation work’s meaning.

The artist is attracted to Yuri Norstein’s Tale of Tales because of its artistic style and the way it shows life emotionally through smooth actions in the animation, which is fully expressed in Yau’s pictogram, Vital Sign.

**English subtitled version of the original animation on YouTube […]

Screen Play (Barry Purves, 1993, 11m, Canada) is an artwork with splendid utilization of props, space and dramatic shifts in narratives. Artist Tin created a pictogram, visualizing Purves’ storytelling in her own artistic approach and with concepts associated with Japanese cultural tradition. The composition of apparent color gradation and design of great clarity resembling that of Ukiyo-e is an ideal embodiment for sentimental expressions. The word “Ukiyo” itself is also an allusion to the homophone “Sorrowful World,” the earthly realm of death and rebirth, sought and relieved in Buddhism. Revealing this work is an imaginative portrayal of the characters’ world filled with uncertainty in a poetic, spiritual tone.

As the artist mentions, several different presentations of pictogram were considered: forming a physical storyboard with illustrated paper cards like screens, expanding on the circular stage as inspiration, and more. For her final treatment, the artist chooses to abandon her reliance on given presets from the Purves’ work to invent a visual language of her own.

The characteristic of clear color graduation and artistic elements of Ukiyo-e 浮世繪 is an ideal way for expressing emotions. The direction of tree branches not only shows the context of time but also the mood of Takako and the overlapping representative elements of the characters. The use of the visual languages is intended to evoke the audience’s imagination. 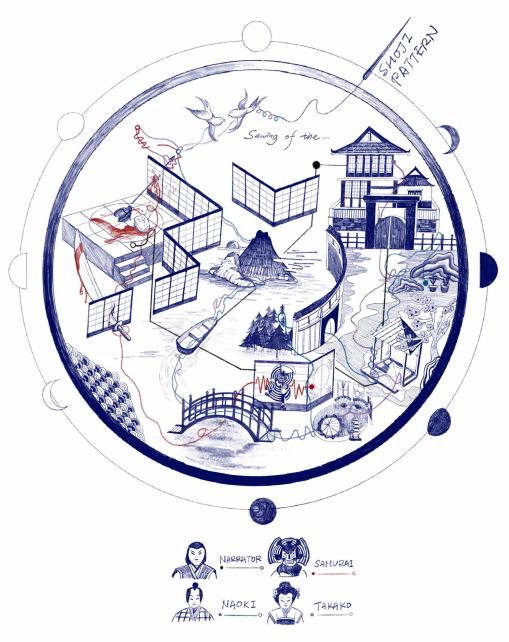 The moment when the storyteller is killed by a story character breaks the traditional 3-act structure, creating a story-within-story narrative. The animation involves multiple narrations — the story told by the story-teller, the story of the storyteller’s story-telling activity, the animation script-writer — as well as visual narration that connects these different layers, all shown as an integrated spectacle in the form of shoji – the traditional Japanese sliding doors, as a dramatic device to demonstrate the shifts of time and space in the work.

The pictogram printed on the plate is a plot-landscape-map of Screen Play inspired by the willow pattern.

Lines (threads) in different colors demonstrate the routes of the characters in the story horizontally and vertically. An infinite cycle of the story-within-story narrative structure is shown by the moon cycling clockwise — when and where does the story start and end? The answer is always in the next pattern in the cycle.

The whole pictogram foregrounds sewing as the embroidery needle represents the third layer of this story, the scriptwriter of this animation or any producers using a story to recreate a story. 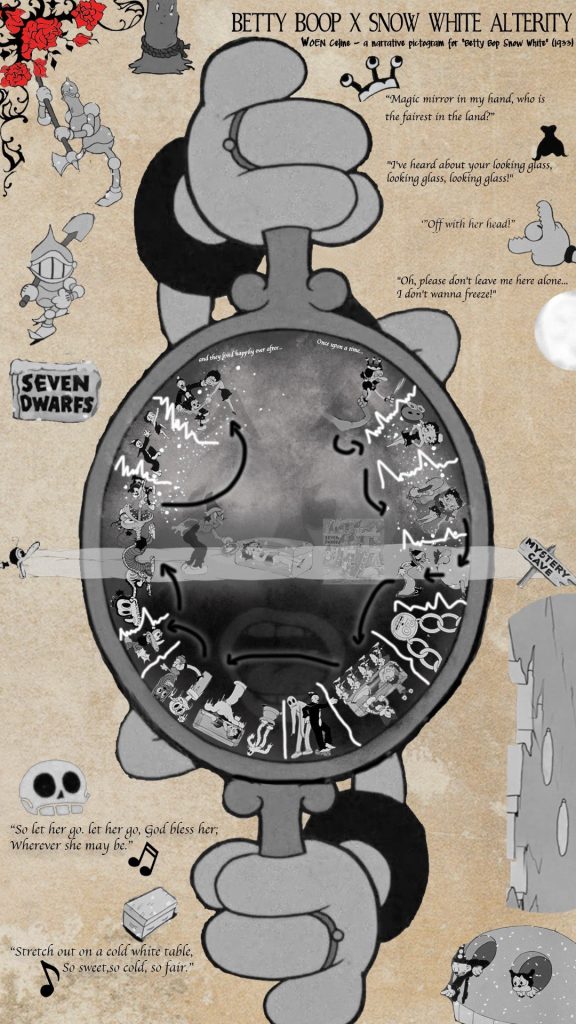 In this pictogram, it is my personal choice to magnify death, which is prominent in the vocal chorus and non-magic elements in Dave Fleischer’s work. The animation pic  is full of moments of transformation, which does not correspond to the Snow White we usually hear of. Objects and image fragments jump out of the box. The queen has more control over the upper world but not the underworld. The plot showed the position of the clock and process in order; like in a cliche fairytale, the story begins with the villain showing up ends as the villain is defeated. But the separation of the upper and lower world is unique as it shows how reality can be recreated, promising the chance of how to acquire a “new” life.

Overall, Fleischer’s pic visualizes his insight of survival. Interpretations may differ, as magic plays a strong role in the complex manifestation of emotions and death.

My pictogram is my individual self-reflection, pondering the oddness of Snow White being presented in Betty Boop’s persona. The characters in the pic live, connect, and interact via a secret language — expressive of emotions and thoughts — but they never speak. The work is, therefore, a representation of the situation between life and death. The story reveals the characters’ hidden true colors. Perhaps there is no difference between dream and real life.

This piece of narrative pictogram analyzes Jiri Trnka’s short stop motion animation film Ruka / The Hand (1965) with an emphasis on breaking down the manifest three-act structure to examine the embedded parametric narration underpinning the work. From the interactions between the characters to the symbolisms of the different gloves, this pictogram aims to visualize how the various components are structurally put together to form a story world that is more than the additive sum of the components, so as to open up more ways to appreciate the animation work.

The pictogram should be read from left to right, following the timeline and story development of the film. To represent how the mood and tone of the film goes from happy and energetic to solemn and lifeless, the background color of the pictogram gradates from bright yellow green to dark olive green. The size and proportion of the Hand and the Artist show their change and imbalance of power while the texts deliver just the right amount of information to facilitate viewers’ comprehension.