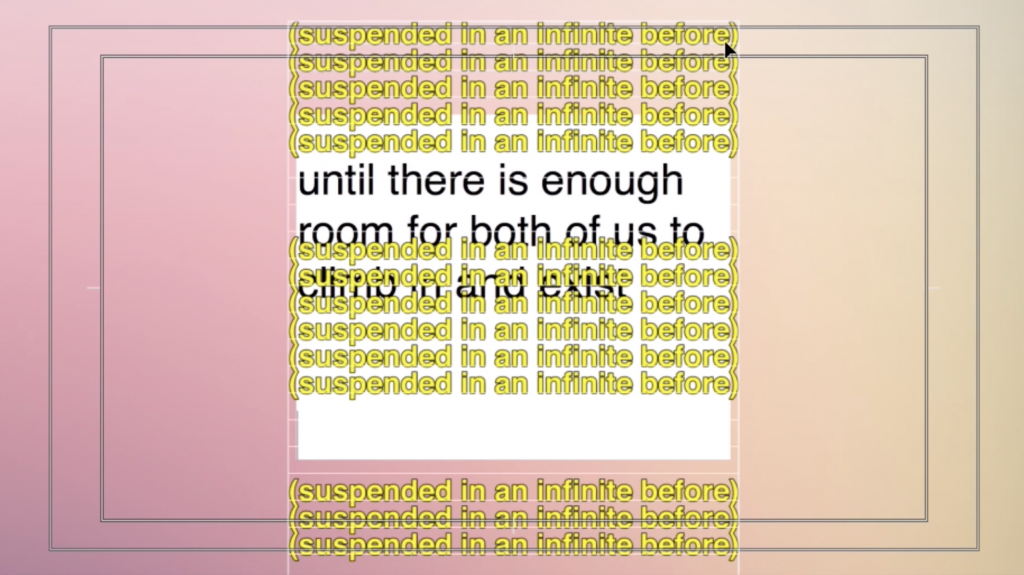 Zach McLane / Crossing the Distance Between Reading and Speaking

Zach McLane and Susan Lin, two fresh graduates from USC, visited the Floating Projects and activities associated with FP members all over Hong Kong a weekend in late September. Zach returns with a “dedication” to mark the brief moment of his trip which seems the new beginning of many things to come. And what about videography?

[feature image above: a video still from McLane’s sometimes I wish my life was a movie which he screened at FP.]

I have been thinking about dedications, words that linger around a text. One dedication has lingered in my mind long after I finished the text which it preceded. I think about it all the time. It appears before Samuel Delany’s Heavenly Breakfast: An Essay on the Winter of Love, Delany’s essay on his time spent living in a commune in New York City in 1968. The dedication reads:

A dedication to taking a single step. A dedication for the moment, however long or brief, in which we reach towards something that does not yet exist. In that moment, we may not see that place we are reaching for, we may not know what it looks like, and we may not know what it might really mean to be there. But we move towards it. Delany’s descriptions of his time in a commune that follow the dedication sound vast and all encompassing. But the commune does end, slightly less than a year after it began. Like a book, it opens up into a seemingly endless space and closes on the last page, a sobering reminder that even the characters that we cherish so closely live only in words. And yet, they move—in the gesture of language, the gesture of reading.

I realize after visiting Floating Projects that I have been reaching out, too. Reaching out towards something. Towards you, towards people that I don’t yet know, towards a world that does not yet exist. I am reaching towards that contours of something—I am closing my eyes and feeling around in some kind of darkness and then I find a shape, and I touch it. I trace it with my finger. I move my hands around and slowly I build the picture of another hand and then an arm and then two arms and a chest and head and then I realize I am tracing a body, my own body. Tracing the contours of myself.

But then it is not me that I am tracing. Or it is me, but I am not tracing. I’m walking. I’m walking as fast as I can because it’s too hot to stay outside and I need to get to the bookstore and buy a book that I saw on the shelf after I went to the wrong place. I’m reading the book and getting taken somewhere, and the more I read the more I hear the voices of my friends. Our voices echoed in someone else’s words.

And then I wonder, maybe the distance between these words and the people who wrote them is not so vast. No, I think, such distances cannot be crossed. But then they are crossed, and things are speeding along. I expect a world in which I reach out and do not find a hand that motions towards me. But there it is: a reach. Gesturing towards some place. The gesture of an invitation, open arms, accepting an invitation to try something and see what happens. The gesture is moving and its moving somewhere, somewhere I don’t know. I’m arriving but this isn’t the end. It doesn’t end at Floating Projects and, as Linda reminds us, it doesn’t end with classifying ourselves or starting our own religion. So, then I wonder what it is we have come here to do. To watch videos and having a discussion. Let’s use the videos as an excuse to talk to each other.

I’m leaving in two days. I’m walking down the street and I can feel the weight of my life pulling me away. I’m already leaving even as I’m just arriving. I’m leaving tomorrow, and then the day ends and I’m leaving tonight. I’m getting on a plane and now I’m going home, arriving somewhere else. I’m still in a gesture, this gesture of movement.

What drew me so much to Videography: Micro Narratives, Temporal Beings, Our Manifestos was the presence of this movement. Movement towards being oneself, in the many ways that might be and come to change. The book foregrounds videography as process. Ideas, rolling out of our mouths as we come to articulate them, become videos, words, conversations with friends. Many times, I realize that I doubt whether or not the projects I am working on are “ready” to be shown. I do not know if I have things “figured out” enough to share them. I wonder when the day will arrive that I will be ready. But now I feel that such days do not come, or that they have already come and passed. I do not have to have all of the answers to have something worth saying.

I showed a video that is mostly text and moves through a poem I wrote three years ago. Now when I look back on the video, I feel that it is romantic and naïve. It does not represent who I am now. But then too, I wonder, why I must approach my younger self with shame? Why not approach my younger self with open arms and the gentleness of forgiveness which holds a space for nurturing and growth? I want to see my older works as pieces of a process. If I make works honestly and believe in them honestly then there is nothing to be ashamed of. All that separates me from that person who made the video is time. I still live in the same body, I still seek a gentle embrace.

I experiment and try new things in order to hear myself in the way that I hope to be able to be heard. I am still coming to know myself, changing, growing. I am still learning to speak. The distance between the pages of a book that I find and the people that I meet who wrote those words, whose thoughts I listen to. Some distances can be crossed in a single step.

My unbounded thanks to Linda and those at Floating Projects who so generously hosted us, spoke to us with a kind of honestly, respect, and openness that I hope to carry onward. Thank you, we will see you again soon.